The Berenstain Bears and Too Much Car Trip

Nope, apparently there's no such thing as "too much car trip." 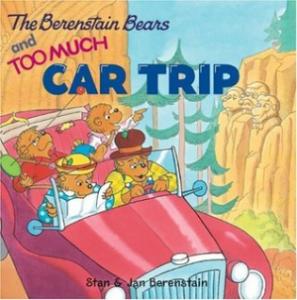 A pretty misleading title, as nobody has too much of the car trip. I was really expecting it to be about Mama and Papa bear realizing that sometimes pushing everybody to do too many things on a long car trip is a bad idea, but no. The kids have a great time, despite their initial dislike of the idea.

Basically, Mama and Papa are planning a road trip with the kids, but not the baby. The kids think it's going to be super boring and they don't want to go. At first they are determined to be bored. Then they see a waterfall and think, “Oh, this is pretty cool!” And then they're interested for the rest of the trip.

They see some re-enactors fighting a war that are depicted as if they are Union and Confederate soldiers. The kids ask why the war happened, and are told, “Countries don't just happen. Folks have to make them happen, and sometimes there's trouble.” And there's about eight gravestones where some people actually died in the battle. Maybe Bear Country actually seceded from the rest of the United States.

And I'm not sure what they're trying to say with Bear Country's version of Mount Rushmore, which only has three faces. Jefferson seems to be the one missing. An anti-adultery message, perhaps?

There was other stuff that they did, but they enjoyed the car trip. And that's it. The end.

The best part: “'If you were here on your honeymoon, how come I don't remember it?' Mama and Papa just looked at each other as Brother whispered, 'We weren't even born yet, silly!' That gave Sister something to think about on the next leg of the car trip.”