It's not even a party. It's just a school day. 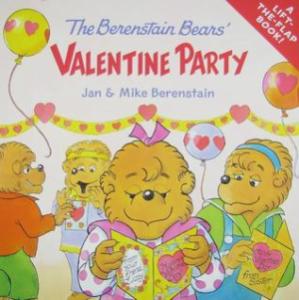 It's another pretty inane lift-the-flap book where the story is just a vehicle for the lift-the-flap gimmick. That's it. The flaps aren't really that interesting. First page: "It is Valentine's Day at the Bear Country School. The students are coming in the big front door." And the "big front door" is a flap that you can open, behind which is Brother Bear. Sister Bear is all the way at the front of the line moving through the rest of the school, so they must have gotten separated at some point. In Sister Bear's class, the teacher has hidden Valentine's and stuff all over the place (and apparently most Valentines need to rhyme). There's a lovely one from her to her friend, and then an exchange of insulting Valentines between her and this guy that she doesn't like, I guess? I don't know. He's not Too-Tall Grizzly; I don't know who he is. "Barry." I'm not familiar with Barry as a character, and I haven't seen him in other books.

There's a rather poor attempt at poetry with the last flap. The Valentine that the whole class gives to their teacher: "To Teacher Jane: We love love our teachers at Bear Country School," and when you lift the flap it says, "But you're our favorite. Why? Because you're cool!" The meter is just messed up there. It doesn't flow. Valentines that rhyme are usually better written than that, which is kind of sad. On the last page, it says, "Happy Valentine's Day," and the entire class gives the teacher a hug. It doesn't even live up to the mediocre hype on the back of the book: "Join Sister Bear and her friends as they share lots of special messages. Who will get the most Valentines?" I don't know. It doesn't say that anybody got "the most Valentines." It doesn't talk about that at all.

As I've noticed with other lift-the-flap books, the material that it's made out of is too easy for young kids, the age group it is aimed at, to accidentally tear the flaps or pages. My kids would just tear this to shreds if I let them play with it. I would have backpack pieces and bookshelves and Valentine halves all over the place. It's just cheaply made. And the backs of the flaps aren't printed on at all. You could do so much more with a lift-the-flap book, and they just didn't care.

The best part: On the second page, inside Sister Bear's backpack, is a Valentine that says "My", a symbol of a heart, then a picture of a pair of pants, and then "4 You." Is that "My heart pants for you?" Who says that? That's just bizarre. "My heart shorts for you?" "...jeans for you?" None of those make any sense. It's next to one that's got a picture of a bee and then says "mine" underneath, obviously "Be mine." That's pretty common. Maybe just "My pants for you?" A bit direct for grade school, don't you think?