It's the Best Day Ever, Dad!

Good because of what it leaves to the imagination. 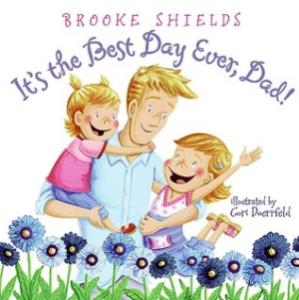 There's two daughters, a mother, a father, and a dog living in the same house. The book is from the point of view of the eldest daughter. Basically, the girls have a day together with their dad. The girls wake him up, he shaves while they brush their teeth. He makes breakfast. Then it says, "After breakfast, we quietly sneak out of the house. Daddy says Mom needs a day to rest." What it doesn't say is why. It also doesn't say how common this type of father-daughter day is. It's entirely possible, given the text of this book, that their mother works full time, and either their father is a stay-at-home dad or the kids go to day care (or school). That can totally be inferred by this. Or you can infer that she's a stay-at-home mom and he's giving her a day off. Either one works with this book, which is wonderful. It leaves the situation up to interpretation. It's not saying, 'Daddy doesn't usually do this.' It's not saying, 'Mommy usually takes care of the kids.' It's saying "Mom needs a day to rest", and that's it.

Also great is the way the dad interacts with the kids. He takes them to the dog park. He teaches the eldest daughter how to throw a ball. At home, he teaches the youngest daughter how to feed the dog (it's stated that it used to be the oldest daughter's job). When the younger daughter takes a nap, the older daughter and the dad "sit on the couch and watch basketball." (The dad falls asleep and takes a nap himself.) When everyone wakes from their naps, they go outside and play hopscotch. They have a tea party They clean up the house: "We like to surprise Mom by cleaning the room and getting ready for dinner." So it sounds like it's a common occurence. Then everybody cooks the dinner together. The two kids make salad and the parents cook the food together. Then they all go outside and have a picnic on their lawn. They look at the moon and then they go to sleep. The dad says, 'Tomorrow we'll go to the beach.'

I was pleasantly surprised with how much I enjoyed this celebrity book. It's a major contrast to the book "Because Your Daddy Loves You" by Andrew Clements, where the father has a single child, and it's fairly clear by his actions that he doesn't take care of her very often (there's no mother involved, so maybe he only has occasional custody in a divorce?). That book concentrates on how the father is never frustrated with the child and never even tells her that he's worried about her when she does something dangerous, because he 'loves her.' Shields's book doesn't have the family encounter any problems, but Clements's is devoted entirely to how the father never complains even when things go wrong (and makes the father out to be some kind of unachievably perfect human being).

As I said, I like this book because there's no implication that this is an unusual circumstance for them, and it even implies that they do this kind of thing all the time (maybe with the mother?). This is just a great day with the dad and the two kids. It's unclear where the mother is for most of the day, but there's no judgment of it. Perhaps she has a personal hobby. It's a great depiction of the father and the two daughters having fun together in a very wholesome way.

It's fun to hang out with your dad.