The Lion and the Unicorn

Things have a way of working out in the end. 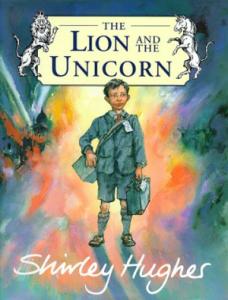 It's a rather long book. It's very well written but aimed at older children, I would say.

There's a little boy named Lenny who lives in London during World War II. There's bombing, and his father is away fighting the war. He has a a brass medal from his father that has a lion and a unicorn on it. His mother sends him away on a train, without telling him she's not coming too, which is rather scary for him. He's an evacuee, and he ends up at this massive house out in the country with three other evacuees who are all girls. He's not really treated very nicely by everybody. It hints in several places that he's Jewish. It never full-out says that, but it says that's he doesn't go to prayers at school and instead he has to sit by himself, and he doesn't eat bacon (the owner of the house is upset by the fact that he's wasting food but he refuses to eat the bacon without the book explaining why).

There's kind of a hidden-away walled garden that he hangs out in. Eventually he meets a man there whose leg is missing below the knee and talks with him. It eventually turns out that the man is the son of the woman who owns the mansion and he's a war hero. Lenny is upset because he's being made fun of at school for wetting the bed (he figures that one of the other girls in the house told on him) although he is getting better about it. He feels better when he talks to the war hero about it, because the war hero says that when he was a boy he wet the bed, and also when he lost his leg it happened again. So he keeps improving, but then his mother's letters stop coming and he gets very upset and tries to run away, but hears something scary and runs back, and then ends up in the garden and the unicorn statue in it has come to life and it's just kind of chilling there and then he falls asleep on the ground by it. When he wakes up, he feels like he's undergone a change. That day, his mother comes to visit and says, "We're gonna go live with your aunt in Wales because our house got destroyed."

So, yeah. It's well written. It's well drawn. I would say it's for older audiences, not for little kids, due to its subject matter and length. It deals with everything in a very respectful manner. Like I said, it doesn't outright say that the boy is Jewish, but it's pretty clear reading between the lines that that is the truth. It says in the short summary on on the copyright page that he's Jewish, but I don't think it ever says that in the book. The summary also says he must try to find the true meaning of courage, which I didn't really see. It's mostly just about him trying to learn to cope with all the terrible things that are happening around him.

Even if you're going through tough times, you'll get through it okay. Everything will be better in the future.