Being a single mom is tough. 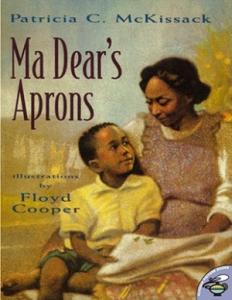 It's pretty. It's also very wordy, though the words are good. It kind of makes me think of Clare Turlay Newberry's books. It's inspired by the author's great-grandmother: a single mother whose husband had died, living in the early 1900s. The woman in the story has one son, and every day of the week except Sunday she wears a different apron. On Monday, she washes and tells her son the story of his father, a soldier who died fighting out west. On Tuesday, she irons. On Wednesday, she goes to get the money for the laundry. On Thursday, they go visit the sick and shut-in. On Friday, she takes her son and goes and cleans somebody's house. On Saturday, they bake pies and sell them at the train station and he gets a bath. On Sunday, they go to church. The end.

It's historical fiction. The writing is well done, evocative, and engaging. There's not much to it. It just takes place over the course of a week and talks about the things that these two people typically do, giving an actual example. Like, "Today is the day we do X. Let's go do X." But much better written than that, obviously. The relationship between the mother and the son is tender and interesting. A cute part is when she peels an apple without breaking the skin and then gives her son the skin and says, "Throw it over your shoulder and it will form the first letter of the name of someone who loves you," and her son does that and it forms the letter 'J,' and she winks because her name is Jonelle.

There's no character development or anything; it's just a well-written story of a single mother and her son around the turn of the 20th century.

No matter how hard your mother has to work, she still loves you.