Not sure whether I'd rather catch the wind or inherit it. 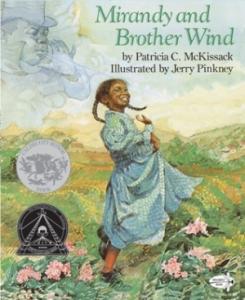 The main character is a girl named Mirandy. It seems to take place in the American South based on the dialects in the book. The whole community is African-American.

Mirandy is planning on going to the junior cakewalk the next evening, and sees the wind blowing by and personified as "Brother Wind." Mirandy expresses a wish to her mother that Brother Wind would be her partner at the dance. "Ma Dear smiled. 'There's an old saying that whoever catch the Wind can make him do their bidding.'" Oddly enough, the illustration does not make her look like she's smiling. It makes her look angry. Maybe she just has a fierce-looking brow, or resting angry face.

For the rest of the book, Mirandy wanders around, trying to figure out how to catch the wind. She asks various people, and her friend Ezel, who is super clumsy, comes by. She tells him that she's going to dance with the wind at the cakewalk, and it's pretty clear that Ezel wanted to dance with her and is disappointed. He doesn't actually tell her, though, he just says, "But I thought I..." and then trails off. Then he smiles. He asks Mirandy if he should ask Orlinda to dance with him. Mirandy expresses apathy at this suggestion, and then leaves and tries to catch the wind with a quilt and fails. She keeps trying and failing, and then returning to Ezel for advice. Ezel suggests that she might need a partner, but she thinks he's mocking her instead of trying to flirt, and basically says, 'You wait! I'll show you I can catch the wind!'

Mirandy and Ezel seem to be around 12 or 14. Mirandy goes to visit a "conjure woman" who tells her how to catch the wind in a bottle, only requesting that Mirandy wear a particular scarf at the dance for payment. Mirandy fails at catching the wind in a bottle. Later, the wind is in Mirandy's family's barn, and she knows that her father had stuffed all the cracks in the barn so it wouldn't leak, so she slams the barn door shut and declares that she's caught the wind.

The dance is that night. Orlinda asks her, "Who gon' be yo' partner?" Mirandy says, "He's real special.... I wish you and Ezel luck. Y'all gonna need it." Orlinda scoffs, saying that she's not dancing with Ezel, since he's so clumsy and she doesn't want him to trip over her. Mirandy gets mad and tells her to stop making fun of Ezel since he's her friend, and declares that she and Ezel are going to win the cake. Then she second-guesses herself, since she already has a dance partner, the wind that she caught, but then goes and whispers a wish into the barn.

She and Ezel dance that night. Ezel dances very well despite usually being clumsy. They win the cakewalk. Mirandy's grandmother, upon seeing them, says, "Them chullin' is dancing with the Wind!"

I like that the book leaves it open whether her wish actually came true or not, because it's definitely possible for somebody to be clumsy in some circumstances (especially when they're near someone they have a crush on) but graceful in other areas. Like people can have difficulty speaking in front of a crowd, but can have no trouble acting in a role in front of others.

It's just this misunderstanding between friends. She thinks Ezel is telling her she can't do something, when he's really trying to suggest that they could dance together without saying it. And it turns out she dances with him because he's her friend and she doesn't want other people being mean to him. She sticks up for him and does the right thing.

The things she does to try to catch the wind are kind of fun. And it's never actually stated what her wish was. It's got a good ending. Neither Mirandy nor Ezel were trying to hurt each other's feelings, and in the end it all works out.

Stick up for your friends.