Don’t use it for scientific accuracy and you’ll probably be fine. 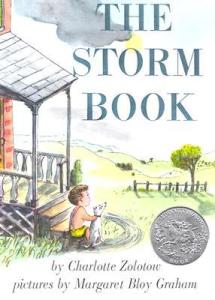 The style of book is very old, where the book alternates between two-page spreads of text on both sides, with no images, and two-page spreads of a single large image that fills the whole area. Usually the text will describe something, and the next spread will show what's going on. The text is done in paragraphs, but it reads more like prose poetry. It feels like the kind of thing that a college poetry student would write if given an assignment to describe something using metaphor and adjectives. It's extremely descriptive. I guess that it's a good example of descriptive language, but compared to modern books, it just seems like a strange thing to do in a children's book. Even most of the other children's books of the time did not have this much descriptive text. It's almost like the writer wasn't expecting it to be illustrated, so she felt like she needed to paint a picture with words, and then an illustrator decided to actually paint that picture. It makes the images seem almost superfluous, which is supported by the alternation of the text and image spreads. You could skip every other spread, only reading the text, and it would be a very similar experience to reading the book.

The plot is this: In the country, there's a little boy sitting outside. He realizes a storm is coming, so he gets worried and runs to his house to ask his mother what's going on. She explaining things to him, like that the lightning is where "our own lamplight comes from". (Huh? As in, they're both electricity? Or as in, the glow of the lightning is like the glow of the lamp? Or, literally, that the lightning somehow provides power to the lamps? It's really confusing.) Then he hears thunder, and he asks what that is, and she says it's the rainclouds breaking against each other. No, it's not. Thunder comes from lightning. It's not a separate thing.

Then we change setting suddenly and we're in a city. We look at the rain in the city. Then we're at the seashore and there's a fisherman in the rain. Then we're in the mountains and there's a young mother with her baby and her husband's outside herding sheep. Then, poof!, we're back at the little boy's house again. (Meanwhile, back at the farm...) Then the rain stops, and there's a rainbow. The mother says, "That's the rainbow, little son... to show that the storm has passed." Come on. Rainbows don't have a purpose. And they don't always happen after a storm. They might even happen before a storm. You could even make one with a garden hose. And you can definitely have a storm that doesn't end with a rainbow, which raises the question of how this mother would know the storm was over.

The illustrations are decent, but there's nothing remarkable about them.

Storms are pretty to look at.

You seem like an incredibly miserable person, I hope you get help. I think it says a lot that 95% of your reviews are on the meh to poor scale. Your reviews are filled with pseudo-intellectual garbage and narrow viewpoints, projecting your own obvious neuroses and insecurities, reading them is insufferable. I shudder to think about a world filled with children raised by people like you.

Thank you for reading, and for your concern about my health.