I almost feel sorry for the wolf. 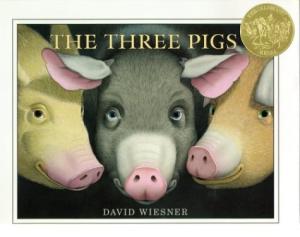 It plays with familiar fables in a cute way. It starts out with the three little pigs, who, upon getting their houses blown down by the wolf, actually get blown out of "the story", or the panels, and then it becomes a fourth-wall-breaking book, as the three pigs take a journey through different stories such as "Hey Diddle Diddle", and they end up rescuing a dragon from getting slain, and the cat from "Hey Diddle Diddle" and the dragon end up moving in with the pigs into the third pig's house who built his house from bricks. And they rearrange the letters of the story to say "They all lived happily ever after."

It's cute. I guess it really has the message of "Don't let yourself get boxed in by the story." "Don't kowtow to fate." Maybe that's reading too much into it, and it doesn't have a message at all, but that's the message I see in it. Which is a good message.

Don't let the outside world tell you who to be.