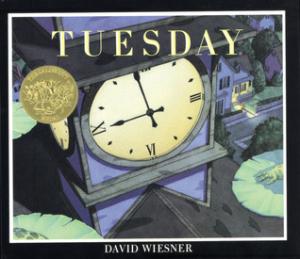 It's mostly wordless and rather imaginative. Not as good as some of his other books, but still good. A bunch of frogs go flying on lilypads throughout the city, through people's laundry and houses. Then they fall off and hop back to the water, leaving a bunch of lily pads in the middle of the street to confound people. At the end, on the next Tuesday a bunch of pigs go flying through the air.

It's silly and rather surreal, with pretty pictures. There's not much to it beyond a lovely flight of imagination, and an implication that we're witnessing the beginnings of something truly unusual.