Not as good as it probably used to be. 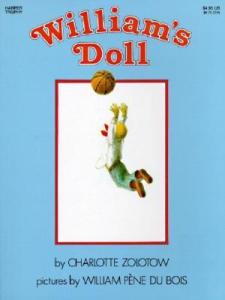 This book was probably great for its time (1972). I think it's a bit outdated in execution, although the message still resonates today.

A little boy named William wants a doll that he can play with, a baby doll with eyes that open and close, and he wants to treat it like a baby and wake it up in the morning and feed it and things like that. His brother tells him, "Don't be a creep!" (Which, today, is just a weird thing to say in that situation. Has the definition of "creep" really changed that much since the 1970s? I guess we would use something like 'freak' in the same sense now.) The boy next door calls William a sissy. William's father gives him a basketball and teaches him how to play. He learns how to play well and has fun, but he still wants a doll. So his father gives him an electric train and sets it up. He enjoys it as well, but it doesn't stop him from wanting a doll. Finally, his grandmother comes to visit. He mentions to her on a walk that he wants a doll. She says, "Wonderful!" He responds in confusion, explaining that everybody else seems to think dolls are not for boys. She replies, "Nonsense," and they go and get a doll, which William loves. "But his father was upset," the book continues. "He's a boy! ....Why does he need a doll?" And the grandmother replies, 'So that he can practice being a father.'

I saw a comic about a year ago that sums this up better than the book. (It's here, at Maximumble, #480.) "You can't give your son a baby doll. That's a girl's toy!" "Why?" "When he grows up he might be... you know..." "A dad?" As the panel zooms out, showing both of the adults bottle-feeding babies. It's still a problem today, discouraging the nurturing side of boys for fear of them being 'feminine,' but performing a complete 180 when they have children, suddenly expecting them to have fully developed that side of themselves.

At the end of the book, the grandmother even chastises the father, pointing out that William will make a great father, and that he might even get his son what he wants, such as a doll. And then the book suddenly stops.

It's got a good message, one that is sadly still relevant today. But it doesn't go into enough detail about the other characters in the book, and they don't seem to learn anything. William isn't even given much of a chance to react to getting the doll, or his father's reaction to it. It doesn't tell the whole story, only a brief snippet.

In 1972, this sort of thing must have been groundbreaking. But now, it doesn't go far enough. Preventing boys from doing anything stereotypically feminine is sexist against males and females alike. Boys should be allowed to do whatever they want, without being stigmatized, or having their sexual orientation assumed. We should be advanced enough as a society to realize that whether boys do something like play with dolls has no impact on their sexual orientation. (And, just to make things extremely clear, all sexual orientations are absolutely valid and normal. I don't want to imply otherwise.) If a boy is straight, playing with a doll won't cause him to become gay. If a boy is gay, preventing him from playing with a doll won't cause him to become straight.

And, on top of that, there is the clear implication that 'feminine' equates to 'lesser,' just as 'woman's work' is 'beneath' a man, being nurturing is a 'weakness.'

At any rate, it's not a bad book. It's decent. It's just that it could be a lot better, and there are better books that have been written in the past four decades. "Teddy's Favorite Toy" addresses the topic of boys playing with dolls in an excellent way-- by not addressing it. Teddy's favorite toy happens to be a doll, but nobody takes issue with that or makes fun of him or anything; the story is about him losing the doll and being reunited with it. And that's the kind of book that we need to help overcome prejudice and stereotypes. Books where things that wrongheaded people disagree with are incidental to the story. We don't dwell on them or question them, they're just facts. But this book was at the beginning of that, and it deserves some historical credit for that.

This book was extremely

This book was extremely inportant to me as a kid in the early 2000's. It realy helped me feel Ok that I didnt fit in with other girls. Just like how Will wanted dolls I wanted cars. I don't know how I ended up with thjs book as a kid, because my parents were not as progressive as this book.

In reply to This book was extremely by Justin (not verified)

Thanks for sharing your story

I'm glad to hear it! Like I said in my review, I'm sure it was great for its time, but thankfully we have even better books now. I'm a fan of "Jacob's New Dress" and "Teddy's Favorite Toy" myself. For girls, maybe "Drum Dream Girl"? Not about things we usually associate with boys, but the same concept. And Todd Parr's "It's Okay to Be Different" for everybody.

I do understand the perspective of "we need books that act like breaking gender stereotypes is normal" as opposed to more books echoing the abnormality of things like this, but I do not think that ignoring the fact that people are still criticized for things like this is the best solution. Children, even parents, still make fun of others for breaking gender stereotypes. I think books that act like these things are normal are a good idea, but I would not go so far as to discourage people from reading this to their children.
I saw some young boys making fun of other boys for wearing nail polish recently at a summer camp I worked at. I believe reading this book as children and having things like that not be discouraged would have made them much more accepting. And, seeing how it felt to have out main character made fun of for his want of a doll may have made them less likely to make fun of others for something similar.
Just something to think about.

In reply to I disagree by Faeron Dewart (not verified)

That's a very good point. I think we need more books of both kinds. The tactic taken by this particular book has been done more recently in a more modern style, and I think it's a little outdated, but it's still a solid book.