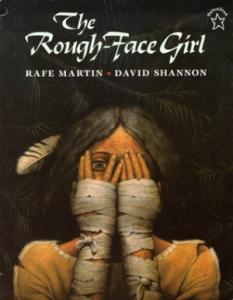 You completely missed the point

I think you are comparing two things (Cinderella & RFG) which are not alike at all. This is a cultural folk tale for one, which not all cultures are alike.
The message of this book wasn’t that RFG was able to have a magical ability to see an invisible man. It was that she could see the beauty of the land that the natives were so very invested in. That was the invisible being she married. Her scars are washed away by the water because they no longer matter. I think you’re comparing two things that aren’t alike and looking for a literal sense.

The book itself claims it is a "Cinderella story". I wouldn't have made that connection on my own, and agree that it's a tenuous one.

I disagree because they are alike and here are some reasons, 1. They both have a girl with two mean stepsisters.2. In both stories the girl ( Cinderella and RFG) get the prince 3. They both have tests to see if they are the princes TRUE love. THANKYOU FOR READING! (Sam if you see this I am not trying to be mean

Aw, I'm so sad that you really missed the message of this story! It is a culturally-rich tale of Algonquian folklore paired with beautiful artwork and filled with hidden messaging. The ability to "see invisible things" is not the point of the story at all. There are over 1500s representations of a Cinderella story and this version emphasizes the kindness of one's heart in order to see things that other people don't. The beauty of the Rough-Face Girl is not represented by her physical appearance, but by the way she treats others (notice how kind and politely she spoke to her father and the Invisible Being's sister) and how carries herself with grace and kindness despite the cruelty of her sisters and the villagers.

I hope you give this story another chance, I suggest reading it with a child and letting them lead the discussion, they often notice things adults miss :)

In reply to Worth another try! by Chloe (not verified)

I think I deserve partial credit.

I did say that one message was don't be haughty and don't lie to people. I felt like there wasn't much of a connection between her being polite and kind and being able to answer the questions properly, though. I'm sure plenty of girls in her world were polite and kind other than her, and they didn't "see" the Invisible Being.

In reply to I think I deserve partial credit. by Cassandra Gelvin

That could be a message of

That could be a message of the story for sure! With my kids, we phrase the messages as a positive (ie: when you are kind, you see the world in a different way; when you have a kind heart and treat others well, you will be happy). If there were other girls in her village that were polite and kind, I wonder if they would have been mentioned in the story. Instead, the only information that we read about the villagers is that they were very similar to the sisters- they were cruel and mocking her. That is another reason why the Rough-Face Girl stood apart from the rest, too. The cruelty of her sisters and her village was physically manifested and represented by the scars on her body, her charred hair, her bandaged hands (so many metaphors and hidden messaging there too!) The Invisible Being is a prolific character, so it is safe to assume that many haughty, entitled women have attempted to become his wife, but only the kind-hearted will succeed- enter the Rough-Face Girl. :)

Thanks for the debate! Interesting topic!